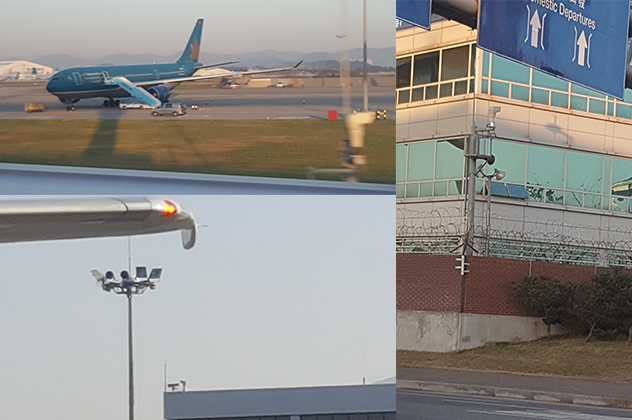 Nowadays, video surveillance in public spaces both inside and outside of airports is one of the fundamental tools used to interrupt adverse events, or even prevent them entirely. These can range from theft, harassment or vandalism to serious criminal acts or terrorist attacks.

The constant and focused monitoring of sensitive and crowded sites as can normally be found in airports has proved to be an effective means of ensuring the safety of passengers and staff, and guaranteeing that numerous simultaneous events can take place without issue.

One of the biggest airports in Korea has recently enhanced its entire external video surveillance infrastructure, adopting the most reliable and robust high-definition PTZ cameras with digital technology that can currently be found on the market: ULISSE COMPACT HD (UCHD).

The monitoring system is made up of a large number of UCHD cameras, which are located in the outer areas of the terminal, along the runways and in the carparks. Management and control of the system is carried out entirely via Ethernet network to ensure consistent and effective real-time monitoring of these vulnerable sites.

Video is recorded in Full HD 1080p quality at 60fps and is transmitted to the control room via Ethernet cable using H.264-AVC (or MJPEG). There, they are then analysed by security operators.

The ability to have up to four independent video streams allows staff to access real-time footage from mobile terminals such as smartphones and tablets, even when they are en-route to an incident.

The pan/tilt movement and positioning functions of this PTZ respond to the operator  who sends commands through the remote keyboard  without delay, thanks to the IP network. This swift response allows for immediate and accurate detection of targets in all conditions.

The rotate, tilt and zoom functions occur at up to 200°/s while the camera has a 30x zoom. All this means that the operator can turn towards and zoom in on a scene very quickly in order to capture as much information as possible in the highest detail.
The hard-wearing and sophisticated mechanics of the IP66-rated PTZ camera means increased resistance against wear and erosion caused by external agents such as strong winds or frost. It also has a wide operating temperature range (from -40°C up to +60° C).
A useful optional extra is the wiper which ensures perfectly clear vision regardless of rain, snow or dust. In addition, with the automatic de-fog function, the camera has clear, natural vision through fog.

The high-sensitivity mode means that video can be captured in light levels of as low as 0.35 lux, providing coverage 24 hours a day. UCHD cameras can also be fitted with an LED illuminator to enable constant monitoring at night, up to a distance of 250 metres.

Thanks to the benefits of the UCHD and digital technology, management of security at the Korean airport has improved greatly. The staff are able to access multiple high-quality video streams from various locations quickly and easily, allowing for constant observation of highly sensitive areas. Management of the video surveillance system is now easier and more effective. Overall, security has been increased when it comes to the interception of, and timely response to, threats and incidents.

Now available BIS and the CCOE/PESO Certifications for Indian market

Chilean mine uses NXM housings in monitoring of heavy-duty tasks

VIDEOTEC is committed to the environment

Maximum protection for airports thanks to an advanced, integrated system from Crisma Security and Videotec

Explosion-proof MHX housings used at a refinery in Taiwan

ULISSE COMPACT THERMAL, protector of a military base in Italy

MPX chosen for safety at a chemical plant in Japan